MOVIE: The Bourne Trilogy (2002-2007)
ACTOR: Matt Damon
BAD ASS CREDENTIALS: A man wakes up on a boat after some fisherman pulled him out of the water… he has no idea who he is or how he got there. Over the course of three movies he figures out his name is Jason Bourne, he works for the CIA and he’s a top secret spy/assassin that now the US government wants to kill. But he’s not going down easy and he’s taking the fight to them.
MOST BAD ASS MOMENT: In the second film, The Bourne Supremacy Jason Bourne takes out a fellow assassin with nothing but a rolled-up magazine. A MAGAZINE. I don’t care who you are, if you can beat someone up with just a magazine, you’re pretty hardcore.
BAD ASS LINE: “I can tell you the license plate numbers of all six cars outside. I can tell you that our waitress is left-handed and the guy sitting up at the counter weighs two hundred fifteen pounds and knows how to handle himself. I know the best place to look for a gun is the cab of the gray truck outside, and at this altitude, I can run flat out for a half mile before my hands start shaking. Now why would I know that? How can I know that and not know who I am? ”

MOVIE: Mad Max (1979), The Road Warrior (1981) and Mad Max: Beyond Thunderdome (1985)
ACTOR: Mel Gibson
BAD ASS CREDENTIALS: After Max, a cop in the Australian Outback, loses his family to a psychotic biker gang, he loses his soul and becomes a shell of his former self… but not before hunting them all down in revenge. Then, in the sequels, he wanders a post-Apocalyptic Outback, searching for gas (which is a rare commodity now) and killing mutants, all while driving his sweet V-8 Pursuit Special
MOST BAD ASS MOMENT: Towards the end of the first film, he finds the last biker he’s getting his revenge on at the scene of a crash. Max handcuffs the biker’s ankle to the wrecked vehicle then gives him a hacksaw and sets a time bomb. Then he says the following:
BAD ASS LINE: “The chain in those handcuffs is high-tensile steel. It’d take you ten minutes to hack through it with this. Now, if you’re lucky, you could hack through your ankle in five minutes. Go.”

MOVIE: The Princess Bride (1987)
ACTOR: Mandy Patinkin
BAD ASS CREDENTIALS: Montoya is the son of a great and talented swordmaker. When Inigo was a boy, a six-fingered man came to his father for a sword designed especially for him. When the six-fingered man returned for the sword, he reneged on his promised price and killed the swordmaker, all in front of Inigo’s eyes. Inigo dedicated his life to finding this man again and exact his revenge. He even knows what he’s going to say when he catches up him: “Hello, my name is Inigo Montoya. You killed my father, prepare to die.”
MOST BAD ASS MOMENT & LINE: Seriously, this is one of the most iconic moments of 80s cinema. Montoya finally catches up with Count Rugen, the six-fingered man. After being apparently defeated by being stabbed several times, Inigo gets up and constantly mocks The Count with his “Hello, My Name is Inigo Montoya, you killed my father prepare to die” speech, over and over again. Finally, the Count makes a mistake and Inigo has him cornerned and the following exchange happens:
Inigo Montoya: Offer me money.
Count Rugen: Yes!
Inigo Montoya: Power, too, promise me that.
Count Rugen: All that I have and more. Please…
Inigo Montoya: Offer me anything I ask for.
Count Rugen: Anything you want…
Inigo Montoya: I want my father back, you son of a bitch.
And then Inigo stabs him in the stomach. Awesome. MOVIE: Patton (1970)
ACTOR: George C. Scott
BAD ASS CREDENTIALS: Do your homework, kids. This guy has real-life bad ass credentials. You can’t tell the story of World War II without talking about all the battles Patton won. The man was one of the great military strategists and a real man’s man, who was never afraid to speak his mind.
MOST BAD ASS MOMENT: While participating alongside British troops in the Allied Invasion of Sicily, his original plan to take the island on the northwest is rejected and he is ordered to go with a much more “cautious” plan. On the day of the invasion, he basically says “F— this” and goes ahead with his original plan, thus defying his original orders. He does things HIS way and it works. Of course, the higher ups, really didn’t like that.
BAD ASS LINE: “Now I want you to remember that no bastard ever won a war by dying for his country. He won it by making the other poor dumb bastard die for his country.”

MOVIE: Terminator 2: Judgment Day (1991)
ACTOR: Arnold Schwarzenegger
BAD ASS CREDENTIALS: T2 did something I didn’t think could be done. It took the first film and improved it. It took the first Terminator machine and made it cooler and more bad ass. This time, though, the T-800 is sent back to PROTECT John Connor instead of killing him before he’s even born.
MOST BAD ASS MOMENT: Much like the first Terminator, this thing can’t be stopped. It just can’t be. Even when the slicker, faster and improved T-1000 manages to beat the living oil out of him, The Terminator comes back, beat to shit and manages to defeat him. And after that he makes a noble sacrifice by allowing himself to be terminated so no one could get all information in his head to re-start Armageddon all over again.
BAD ASS LINE: It’s reeeeeally tough to pick. Of course you have “I’ll be back.” But while he says it in this film, it’s more iconic in the first film. The obvious one is “Hasta La Vista, Baby”… but that one always struck me is him saying to Sarah Connor the same thing Kyle Reese said to her in the first film: “Come with me if you want to live.”

MOVIE: No Country For Old Men(2007)
ACTOR: Javier Bardem
BAD ASS CREDENTIALS: Anton Chigurh is a hitman that is hired to recover some stolen drug money from a deal gone awry. That is just scratching the surface when it comes to Anton Chigurh. Chigurh is a cold, merciless, cunning, killing machine. When he is set to kill someone or accomplish a task… he will get it done. And God help you if you doubt him. Chigurh is a living and breathing personification of death itself. Everything you’ve done in life, eventually leads you to him. You will die, unless he decides otherwise. And the choice he leaves up to fate… by the flip of a coin.
MOST BAD ASS MOMENT: Handcuffed and arrested he breaks out of police custody by sneaking up behind the cop who captured him and wraps the handcuffs around his neck and chokes him to death.
BAD ASS LINE: “I won’t tell you you can save yourself, because you can’t.”

MOVIE: The Killer (2010)
ACTOR: Chow Yun Fat
BAD ASS CREDENTIALS: Honestly? He gets on this list because he’s Chow Yun Fat, one of the greatest Hong Kong action stars of all time. The character of Ah Yong is a hit man riddled with guilt for having accidentally blinded a beautiful singer during one of his hits. He takes one least job (isn’t always “one last job?”) to raise money for an operation for her. But then, of course, his boss double crosses him.
MOST BAD ASS MOMENT: Ah Jong alongside a unlikely friend in policeman, Li, are stuck in an abush by The Triad. Both of them, alone against an entire gang go through a bout 10,000 bullets to get the leader of the Triad. Bloodied with guns still loaded it ends in an awesome Mexican stand-off.
BAD ASS LINE: “I always leave one bullet, either for myself or for my enemy.” 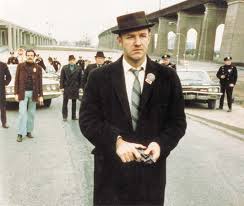 MOVIE: The French Connection (1971)
ACTOR: Gene Hackman
BAD ASS CREDENTIALS: Doyle is a no-nonsense, tough-as-nails, straight-shooting narcotics officer in gritty 1970s New York City. He’s on the tail of a French drug smuggler and he’ll break whatever rules he has to to get catch him.
MOST BAD ASS MOMENT: Bullitt has the most bad ass car chase scene of all time. Second most bad ass belongs to the French Connection. Doyle chases this guy all over NYC. The guy gets on an el train and Doyle even follows that! Pedestrians? He doesn’t care. Damage to public property? He doesn’t care. He just has to catch is man. And when he does… well, it doesn’t well for the perp.
BAD ASS LINE: “All right, Popeye’s here! get your hands on your heads, get off the bar, and get on the wall!”

MOVIE: Inglourious Basterds (2009)
ACTOR: Melanie Laurent
BAD ASS CREDENTIALS: Quentin Tarantino has a thing for strong, hot, bad ass women. Just look at Jackie Brown or Kill Bill. Shosanna is no different. She is the last surviving member of a Jewish family that was gunned down and executed by the vicious Nazi Colonel Hans Landa. Years later, she’s all grown up (and smoking hot) and running a movie theatre in Nazi-occupied France under a fake name. When she is forced to show a Nazi propaganda film in her theatre, where every single high ranking member of the Nazi Party (including ol’ Adolf himself) will be in attendance, she realizes this is a great opportunity… a great opportunity to lock all those genocidal bastards in one place and blow them the hell up.
MOST BAD ASS MOMENT: As hundreds of Nazis are burning alive in this locked theatre, an image of Shosanna from the projector sadistically laughs at their fate.
BAD ASS LINE: “My name is Shosanna Dreyfus and THIS is the face… of Jewish vengeance!”

MOVIE: Braveheart (1995)
ACTOR: Mel Gibson
BAD ASS CREDENTIALS: All you wanted to do was be a farmer. That’s it. That’s all. Ok, there’s this lady you had your eye on… and you got secretly married. Wanted to start a little family on your little farm. But then, God damn it, some English douche bag thinks he can have your way with YOUR woman and well, you’re not going to stand for that are you? No. So you kick his Limey ass. And oops, looks like you just started a revolution against the king.
MOST BAD ASS MOMENT: It’s the end of the movie… Wallace has been captured and he’s on display for a public torture. So they torture him, they stretch him, they disembowel him, and with each unimaginable pain he is asked to renounce his cause, but he refuses to speak. Finally… he relents and just as his torturers think he’s going to repent he yells out one word: FREEEEEDDDOOOOOMMMMM!!!
BAD ASS LINE: “Lower your flags and march straight back to England, stopping at every home you pass by to beg forgiveness for a hundred years of theft, rape, and murder. Do that and your men shall live. Do it not, and every one of you will die today.”