MOVIE: Star Trek (2009)
ACTOR: Chris Pine
BAD ASS CREDENTIALS: I’m not a Trekkie. I’ve always found the show quiet boring… the movies were pretty bad too (except for Wrath of Khan which is AWESOME.) So when the re-booted Star Trek came out last year with an all-new, all-pretty cast. I was skeptical. But then I saw it, and not only was I blown away at how freaking awesome it was… but also by Captain Kirk. Now I love William Shatner as much as the next guy, but he’s kind of a doofus. But this Captain Kirk was not a doofus. He could kick ass, he had a smart ass mouth on him, he had balls the size of grapefruits AND he could seduce hot alien women. Now, Trekkies may argue the original Shatner Kirk did the same thing. Maybe he did, but he didn’t do it as cool as this.
MOST BAD ASS MOMENT: While at Starfleet Academy, Kirk is put through a training simulation that is literally designed for everyone to fail… the point? It’s supposed to test how you handle stress, fear and defeat. Kirk being the kind of guy he is manages to hack into the simulation and change the program so that he is able to easily win the scenario. Doesn’t sound thrilling written down, but when you watch it, it’s awesome.
BAD ASS LINE: [After being told he would be an officer in 4 years] “4 years? I’ll do it in three.”

MOVIE: Hot Fuzz (2007)
ACTOR: Simon Pegg
BAD ASS CREDENTIALS: Angel’s a tough, no-nonsense cop in London who is so good at taking down criminals, he starts making the other cops on the force look bad. He gets transferred to the little town of Sanford where crime is essentially non-existent. But when he’s there taking down teenagers and drunk drivers, he starts to realize that this sleepy little town is hiding a huge secret.
MOST BAD ASS MOMENT: The Neighborhood Watch Alliance (NWA) thinking that Angel is dead, are surprised when he strolls back into town armed to the balls with guns and proceeds to take them out, one-by-one.
BAD ASS LINE: After the local doctor gets shot in the foot: “You’re a doctor… Deal with it.”

MOVIE: Scarface (1983)
ACTOR: Al Pacino
BAD ASS CREDENTIALS: Tony Montana realized the American dream. He was an immigrant, came to the United States and built himself into something special… to the top of an empire. Of course, that empire just happened to be Cocaine. But you know, whatever.
MOST BAD ASS MOMENT: Come on. Like I even have to say it. With the world he built crumbling around him, and a Columbian drug cartel crashing into his home to take him down, Montana stands tall. He knows he’s going down, but he’s going down swinging.
BAD ASS LINE: “Say, hello to my little friend!”

MOVIE: Rocky III (1982)
ACTOR: Mr. T
BAD ASS CREDENTIALS: Clubber Lang was the first guy to decisively beat Rocky Balboa. Apollo Creed was a tough S.O.B., no doubt, but he went a full 15 rounds with Rocky in the first movie, won by decision, and then lost in II. Clubber Lang beat Rocky by knock-out in the second round. Clubber Lang is a bad, bad man.
MOST BAD ASS MOMENT: He knocks out Rocky! The only man in any of the movies who manages to do so. Yeah, he loses in the rematch, but whatever, he’s the only guy to do it. Not Creed, Drago or Dixon can make the same claim.
BAD ASS LINE: Interviewer: “Clubber, what’s your prediction for the fight?” Clubber: “Pain.”

MOVIE: Bullitt (1968)
ACTOR: Steve McQueen
BAD ASS CREDENTIALS: First off, you got Steve McQueen, perhaps one of the coolest actors of all time. (He did his own stunts!) Second, you have the fact that he has the coolest freaking car of all time. Third, Bullitt started the idea of the “cop who plays by his own rules” trend in movies. You need more?
MOST BAD ASS MOMENT: The ICONIC car chase sequence. No car chase scene before or after can even touch this scene where Bullitt is chased by two hitmen through the streets of San Francisco.

MOVIE: Enter The Dragon(1973)
ACTOR: Bruce Lee
BAD ASS CREDENTIALS: No list of bad asses is complete without Bruce Lee. The man was just absolutely incredible and here he showcased it in his best film. Lee (great, original character name) is invited to a mysterious martial arts tournament on a remote island by an enigmatic figure called Han. He finds out that Han is responsible for the death of his sister… it’s on now bitches.
MOST BAD ASS MOMENT: When given the opportunity to fight O’Hara, one of the men who killed his sister, in a “contest,” Lee pulls no punches and beats the holy hell out of him… killing him in the process.
BAD ASS LINE: After O’Hara breaks a board in a demonstration of his power: Lee: “Boards don’t hit back.”

MOVIE: Iron Man (2008) & Iron Man 2 (2010)
ACTOR: Robert Downing Jr.
BAD ASS CREDENTIALS: Let’s face it Tony Stark is everything we want to be. He’s obscenely rich, he’s irresistibly charming, he can have any woman he wants, ridiculously intelligent, he has the coolest car collection… and oh yeah, he’s a superhero with the most bad ass suit of armor in the world.
MOST BAD ASS MOMENT: After being abducted terrorists in Afghanistan and forced to build a missile in a cave with nothing but scraps, instead Stark builds his first Iron Man suit and then takes out the entire cave of terrorists.
BAD ASS LINE: “The truth is… I AM Iron Man.”

MOVIE: The Matrix Trilogy (1999-2003)
ACTOR: Keanu Reeves
BAD ASS CREDENTIALS: After his consciousness was plucked out of the Matrix, Neo was told by Morpheus that he was “the One” that will end the war between the humans and the machines. Dressed in a bad ass outfit with all the great fighting styles “downloaded” into his brain, Neo is complete and total master of the The Matrix.
MOST BAD ASS MOMENT: The subway fight scene with Agent Smith in the first film still remains as the one of the best fights of all time.
BAD ASS LINE: Tank: “So what do you need?” Neo: “Guns. Lots of guns.” 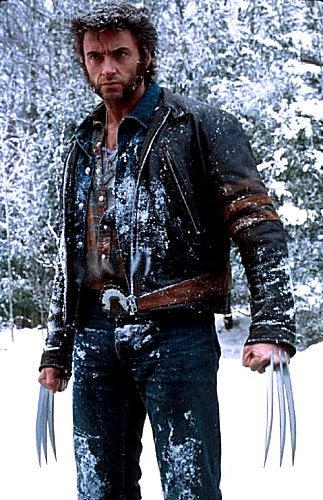 MOVIE: The X-Men trilogy (2000-2006)
ACTOR: Hugh Jackman
BAD ASS CREDENTIALS: A man with no past with the ability to heal any wound and six 10-inch claws that can pop out of his knuckles. I mean really, how awesome is that?
MOST BAD ASS MOMENT: The fight with Yuriko at the end of X2.
BAD ASS LINE: Victor Creed: “Do you even know how to kill me?” Wolverine: “I’m gonna cut your goddamned head off. See if that works.” MOVIE: Gladiator (2000)
ACTOR: Russel Crowe
BAD ASS CREDENTIALS: Husband to a murdered wife, father to a murdered child. Maximus was ordered to be killed by Emperor Commodus when he remained loyal to Commodus’ father, Marcus Auerilius. Maximus escaped, but was captured and sold into slavery… but these weren’t just normal slaves, they were gladiators. Now forced to fight for his freedom, Maximus does more than just fight in an arena, he inspires all of Rome.
MOST BAD ASS MOMENT: He fights and defeats THIS GUY, who also happens to be Rome’s only undefeated gladiator. This guy was essentially Mike Tyson of Roman times and Maximus takes him out. When Commodus gives the thumbs down to indicate that Maximus finish him. This might not seem bad ass, but it is. By refusing the emperor he essentially told him to go fuck himself.
BAD ASS LINE: “My name is Maximus Decimus Meridius, commander of the Armies of the North, General of the Felix Legions, loyal servant to the true emperor, Marcus Aurelius. Father to a murdered son, husband to a murdered wife. And I will have my vengeance, in this life or the next. ”