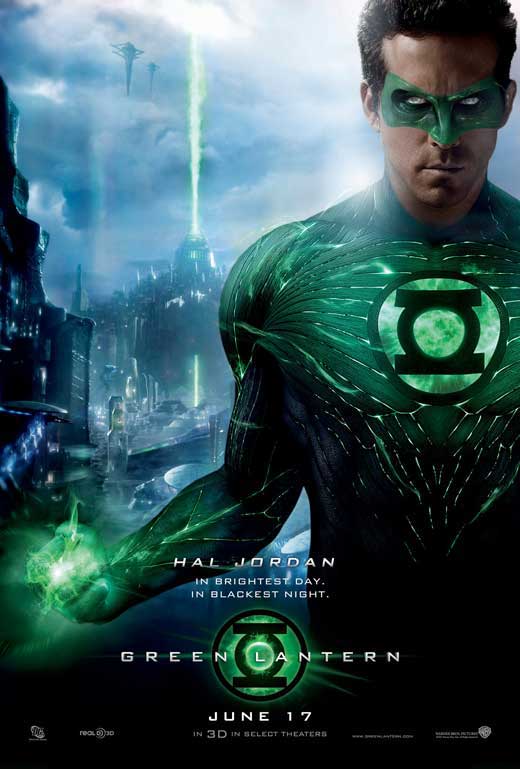 Well, whaddya know? My plans DIDN’T fall through, for once. Hence, why you’re being graced with my presence for the 3rd time in a week (I wouldn’t get too attached – it won’t happen often).


Today, I will be reviewing the summer’s latest superhero flick (and the first offering from the DC Universe) – Green Lantern, starring Ryan Reynolds, Blake Lively, Peter Sarsgaard, Mark Strong, Angela Bassett, and Tim Robbins. Does DC kick the door down strong, or does Marvel still own its ass in the film department (sans the Nolan Batman films)? Click the link to read my thoughts!


Basic Non-Spoiler Plot Summary: After Abin Sur, a member of the legendary Green Lantern Corp, is killed by Parallax, his ring is sent to find a worthy successor. Enter Hal Jordan (played by Ryan Reynolds), whose world is suddenly turned upside down when he becomes the new Green Lantern – just as a great threat looms over Earth…


The Pros: Call me a pessimist, but I expected Ryan Reynolds to be a complete trainwreck as Hal Jordan. But you know what? He wasn’t bad. Not in the slightest (Okay, maybe in one area, but I’ll discuss that in the Cons section). But overall, I thought he filled the role fairly well. His acting was decent (he actually showed EMOTION, and it didn’t look forced), he brought a cocky-charisma, and he seemed to be really putting an effort into the role, instead of just phoning it in (like I expected him to). So, for that, I will give credit where credit is due – kudos to Ryan Reynolds for putting 90% of my doubts to rest.


Since I started talking about Ryan Reynolds, I might as well get into the other actors. Blake Lively (from Gossip Girl fame) plays Carol Ferris, Hal Jordan’s main squeeze. To be honest, she really didn’t do much. It’s funny, ‘cause in an interview on the Today show, she says (and I’m paraphrasing) that in her role, she plays much more than just your average damsel in distress. Well, in one particular scene – THAT’S EXACTLY WHAT SHE IS!!! Sure, she’s a stronger character than, say, a Lois Lane or a Mary Jane Watson (or at least she’s portrayed as much), but overall, she takes a character that could’ve made a real impact with the audience – made a real connection – and just made her forgettable. Other characters, such as Dr. Amanda Waller (played by Angela Bassett), and Senator Robert Hammond (played by ANDY DUFRANE – err – sorry, TIM ROBBINS) are good in their small roles, but not enough to make a big impact. The only memorable performances, other than Reynolds, come from Dr. Hector Hammond (played by Peter Sarsgaard) and Sinestro (played by Mark Strong). Oh, and GEOFFERY RUSH voiced Tomar-Re – that ALONE is worth the price of admission!

Finally, I wanted to briefly touch upon the story. Yeah, the pacing is all over the place here (which I will discuss in a moment), but overall, I thought the story did a decent job of cramming enough of the Green Lantern origin story into the film. I think that the screenwriters were trying to put too much into the film, and it shows. But in the end, the finished product is at least coherent enough to entertain the summer movie audience. The action sequences are great, the special effects are – to use an old cliché – “out of this world” (but that’s also a bad thing – more on that later) and the last 20 minutes or so of the film had me on the edge of my seat. So yeah – the lack of script and clunky pacing is more than made up for in the action, special effects, and great storytelling (especially one particular sequence, where it doesn’t take its audience for granted. I don’t want to include any spoilers, so I’ll just say it has to do with Blake Lively’s character and Green Lantern’s mask. Those who’ve seen it know what I’m talking about).


The Cons: Okay – let’s start with the CGI. Yeah, the CGI is pretty awesome. But at the same time, I’m watching this film, and I’m saying to myself, “Yeah, I think they went a little overboard with the CGI.” The first 10-15 minutes or so is NOTHING BUT CGI! I would venture to say that about 50-60% of the overall film is CGI. Think of 300, how the ENTIRE film was done in front of green screen. That’s basically what we’re dealing with here, except substitute ancient Greece for Sector 2814 somewhere in outer space. Watching the opening scene of Green Lantern, I felt like I was watching a cutscene from Halo: Reach, or some other Xbox 360 game set in outer space – that’s how bad it was. I mean, I’m all for CGI and special effects when done right – but when an entire scene is made up of CGI, it just screams out “you’re watching a movie!” rather than allowing me to suspend disbelief and believe that Sector 2814 (or wherever the Green Lanterns live) actually exists. This leads me to my topic for today – “IS THERE SUCH A THING AS ‘TOO MUCH’ CGI?” Sound off in the comments section below at the end of this review!


Next, Ryan Reynolds. While I did praise him for his portrayal of Hal Jordan, there was one part of his role that I found a little bit off. What would that be? The recital of the Green Lantern Oath. Was it just me, or did Ryan Reynolds come off sounding like a complete beta reciting that oath? I mean, the guy advertising the Green Lantern RIDE at Six Flags Great Adventure over here in Jersey gives a more convincing oath than Reynolds did in the film (don’t believe me? Check out the TV spot HERE). I know it looks like I’m just nitpicking, but the Green Lantern oath is one of the most important aspects of the Green Lantern character. You would at least think he’d deliver it with a little more, you know, “alpha-ness” (and here I go making up words again).

Finally, as I mentioned earlier, the pacing – it’s sorta all over the place. Like REALLY all over the place. How the film managed to pull together a coherent story from that seems like a miracle, looking back at it. For example, the middle of the film really starts to lag due to what I like to call “unnecessary information.” Basically, the film is trying to give us as much information as possible about the Green Lanterns and what they can do and all that crap – as if they’re giving a college lecture on it. Probably only half of that information becomes useful later on in the film, so in essence, they just wasted the audience’s time with “unnecessary information.” That, obviously, affects the pacing of the film, ‘cause instead of telling us that the Green Lantern’s ring can get him an on-call stripper at 3am, the film could’ve cut to a scene that was actually relevant to the story. See what I mean, folks?


Conclusion: This was DC Comic’s first opportunity to “wow” movie audiences this summer, without the help of the Batman franchise. Did Green Lantern deliver? Yes and no – the film has its pros, and it has its cons, and they both seem on equal footing with each other. I will say this, though – I was genuinely shocked that Ryan Reynolds pulled off the Hal Jordan role as great as he did – so props to that guy for sure. The rest of the acting was okay, if not forgettable (with the exceptions of a couple, but even those performances aren’t necessarily “must-see” material – although anything with Geoffrey Rush is worth checking out, guy is fucking awesome), the action delivered, the CGI is amazing to look at, even if (in my opinion) they went WAYYYY overboard with it, and the story is entertaining enough to make Green Lantern decent comic book fare, and nothing more. Recommended for Adults, Teens, Mature Children.


And that’ll do it. As always, any questions, comments, or feedback in general, send an email to sportsguy515@aol.com, or simply leave a comment in the comments section below (such as an answer to my TOPIC QUESTION from above – hint hint)


As if my movie exploits are over for the weekend…as I was writing this review, I just finished making plans to hit up the arthouse theatre about 15 minutes from my house to check out the new Woody Allen movie, Midnight in Paris, said to be “the indie hit of the summer.” And of course, I’ll have my full review up on this site tomorrow!

Cinephile extraordinaire, a budding filmmaker, and host of Forced Perspective. A resident of NY/NJ, he spends most of his time looking for new movies to watch and learning the craft of filmmaking. You’ve probably also seen him hanging around Madison Square Garden and Yankee Stadium at some point. If you see him approach your movie theater, be sure to let him in – he’s the guy in the Yankees cap!
View all posts by SportsGuy515 →
Tagged Angela Bassett, Blake Lively, comic book movies, Comic Books, DC Comics, Films, Geoffrey Rush, Green Lantern, Movie Review, Peter Sarsgaard, Ryan Reynolds, Tim Robbins. Bookmark the permalink.