What a long, strange trip it’s been. At long last, after 90 complete and total bad-asses we get to

And without further delay…

Campbell was ASH. Ash is a guy who got stuck in a haunted cabin in Evil Dead II and after

seemingly defeating the evil forces, a vortex/worm hole opens up and sucks him into medieval times.

What the? BUT, this is AFTER he’s forced to chop his own hand off (Because, it went “bad”) and

replace it with a chainsaw. A FUCKING CHAINSAW HAND! Now he’s stuck in the past and just wants a

way home… but first he has to defeat an army of the undead and an evil version of himself. Bring

it.
MOST BAD ASS MOMENT: The very end of the film. Ash has returned home and gone back to his old day

job as a peon at S-Mart. Suddenly, a demon witch attacks the store, Ash grabs a shotgun, jumps on a

shopping cart and barrels towards the demon as he pumps her full of lead.
BAD ASS LINE: Jesus Christ, there’s too many to list. Here’s a sample

in front of your nine-year old eyes? You train your mind and body for years and dedicate your

entire life to fighting crime to avenge the death of your parents. To me, Michael Keaton is still

the best Batman on screen. Bale is pretty good, but he’s included on the list because he’s

currently the man in the bat suit. Batman is the most bad ass superhero ever. Hands down. He

doesn’t have any super powers. He’s just tough as hell and can beat you senseless. Plus, no

superhero has a badder looking costume than the Bat. Batman is awesome because he’s a superhero

that could actually exist.
MOST BAD ASS MOMENT: While fighting R’as Al Ghul on an out-of-control subway car at the end of

Begins, Ghul mocks him for not being able to cross the line and actually kill anyone. But

him… but he isn’t going to save him either. He jumps out of the car and lets the whole damn train

crash and explode into the side of a building.
BAD ASS LINE: “I’m Batman!” MOVIE: Terminator 2: Judgment Day (1991)
ACTOR: Linda Hamilton
BAD ASS CREDENTIALS: First a terminator is sent back in time to kill her before she gives birth to

her son, John, who will in the future lead the resistance against the machines. Well, then she was

just your average girl. But in the moments leading up to T2, she became a tough-as-nails, bad-ass

bitch who will stop at nothing to protect her son. So much so that everyone thought she was nuts

and locked her up. But when she breaks out of the asylum and is forced to protect her son once

again, well… I wouldn’t want to a toaster, let alone a terminator at the point.
MOST BAD ASS MOMENT: With one of her shoulders dislocated and a T-1000 bearing down on her… what

do you think she does? She takes her shotgun and WITH ONE ARM, loads it, cocks it and blasts the

T-1000 as he continues to advance. It’s a hell of an awesome visual.
BAD ASS LINE: After breaking Dr. Silberman’s arm: “There’s 215 bones in the human body. That’s MOVIE: The Star Wars Trilogy (1977-1983)
ACTOR: Harrison Ford
BAD ASS CREDENTIALS: What does it say about Harrison Ford when he’s portrayed not one, but TWO of

the greatest action heroes of all time? I think that’s why he’s my personal hero. Anyway, what is

not to love about Han Solo? He’s cool as hell, he’s got a giant dog co-pilot, he’s charming (in a

rogue-ish kind of way), he’s a hell of a pilot, can take care of himself in a fight and has the

coolest space ship of all time. Add that all together and it’s just pure bad ass. OH… and, Han

Chewey and C3PO where all just betrayed Mr. Colt45 Billy Dee Williams and handed over to Darth

Vader. Han is going to be put in an experimental freezing process called “Carbon Freeze” and it’s

possibly he might not survive. Leia, who has been refusing his advances the entire movie finally

gives in and kisses him in a passionate moment. They get pulled apart and she yells “I love you!”

Who is the man that would risk his neck
For his brother man?
SHAFT!
Can you dig it?

Who’s the cat that won’t cop out
When there’s danger all about?
SHAFT!
Right On!

They say this cat Shaft is a bad mother
SHUT YOUR MOUTH!
I’m talkin’ ’bout Shaft.
THEN WE CAN DIG IT!

He’s a complicated man
But no one understands him but his woman
JOHN SHAFT! … yeah that sums it up.
MOST BAD ASS MOMENT: It’s hard to pick just one. I still like just the opening credit sequence.

Shaft walks up out of the subway with the iconic theme music playing, and just in the way he walks

and carries himself you KNOW this is one bad mother— Shut your Mouth!
BAD ASS LINE: “Don’t let your mouth get your ass in trouble.” 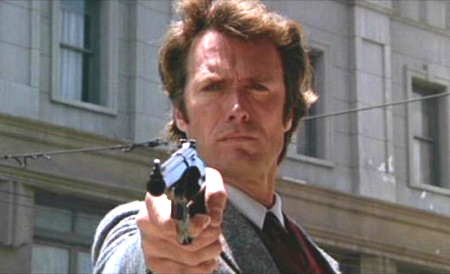 MOVIE: The Dirty Harry Movies (1971-1988)
ACTOR: Clint Eastwood
BAD ASS CREDENTIALS: The ultimate cop who plays by his own rules. Fed up with rules and

bureaucracy, Callahan does things his own damn way. He will cross moral, ethical and political

simple.
MOST BAD ASS MOMENT & LINE: You KNOW what this link is.

impossible. After years working in Hollywood as a character actor, Samuel L. got his chance to

movie he’s been in ever since. Jules is a hitman. He looks good with his slick duds and his

slicker hair. He always gets the job done and he does it with style.
MOST BAD ASS MOMENT & LINE: If you thought it’d be anything other than THIS, then there is no 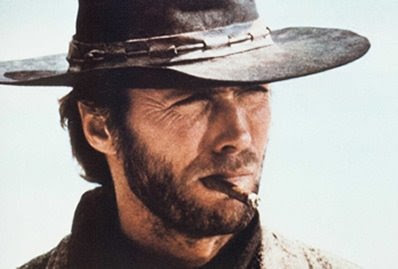 MOVIE: The Good, The Bad and The Ugly (1966)
ACTOR: Clint Eastwood
BAD ASS CREDENTIALS: He’s tough, mysterious and the fastest draw you’ll ever see. The Man with No

Name looks out only for himself and stops at nothing when he has a goal in mind. While he’s not

morally bankrupt, he doesn’t always seem to care about right and wrong. In fact, he spends most of

trying to out think Tuco and out run “Angel Eyes.”
MOST BAD ASS MOMENT & LINE: The Greatest

Stand Off in Movie History

MOVIE: All of the Connery Bond movies
ACTOR: Sean Connery
BAD ASS CREDENTIALS: Daniel Craig was a good James Bond. He’s dark and he is a bad ass. However,

Craig only PLAYED James Bond. Sean Conner IS, WAS and ALWAYS WILL BE James Bond. If you don’t know

genitalia, because I doubt you do.
MOST BAD ASS MOMENT: That’s like asking which child is your favorite. Watch any of the Connery

Bond movies and you’ll get a lesson in manliness. It doesn’t matter which one.
BAD ASS LINE: “Bond… James Bond.”

And, at long last…

MOVIE: Die Hard (1988)
ACTOR: Bruce Willis
BAD ASS CREDENTIALS: There is NO discussion about this. There is NO debate. There is NO room for argument. John McClane is the greatest movie bad ass of all time. Period. McClane took down a group of well-equipped, bad ass terrorists SINGLE HANDED, saved his wife from their clutches, saved the Nakatomi plaza as well as most of its employees and pissed of the LAPD and the FBI all in one night. “So what?” You may ask. He did all of this… in his bare feet after walking through glass. Greatest Bad Ass of All Time.
MOST BAD ASS MOMENT: Hans Gruber and his last surviving henchman are getting ready to escape, holding Holly (John’s wife) hostage. John McClane is beat to shit. Shirt-less, shoe-less and bleeding like a stuck pig. Worse news? He only has two bullets left. What to do? Well, the answer of course is tape a gun to his back (with festive Christmas tape), pretend like he’s surrendering and then take out the Euro trash.
BAD ASS LINE: “Yippe-Kai-Yay Motherfucker!”


And that is that. I hope you’ve all enjoyed the countdown of the 100 Greatest Movie Bad Asses of all time.